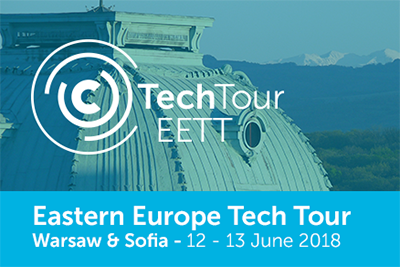 A dedicated Selection Committee of experts have chosen 30 presenting companies, who went through a vigorous application process competing with over 150 applicants for a chance to present to European Venture Capital leaders, local and international funds and policy makers.

“Leading early stage CEE-focused investors formed the Selection Committee and nominated some of the strongest companies for the Tech Tour. We received many applications, and are happy to confirm that participating companies are a great illustration of the liveliness, sophistication and global ambition of CEE innovation.” – Pavel Bogdanov, Co-President of the Eastern Europe Tech Tour.

The leadership of the Forum is driven by known names in the world of Venture Capital and Private Equity. They represent top investors from different backgrounds and sustained experience in the region.

Galitsky is a Managing Partner at Almaz Capital Partners, an international venture fund with its head office in Portola Valley, CA, which invests in early stage deep tech companies. Alexander is a well-known innovator, entrepreneur and investor in the USA and Europe.

Bogdanov is a General Partner at Almaz Capital Partners. Currently on the boards of Alawar Entertainment, AlterGeo, Flirtic and Nival. Previously, he led deal execution for Jelastic, Parallels, Acumatica, Alawar, and other Almaz companies. He was a partner at Russian Technologies (RT), an early stage venture capital fund in Moscow.

Hejka is a Co-Founder and General Partner at OTB Ventures. In the past he has worked at Intel Capital, first as Investment Director responsible for CEE investments and then as Vice-President and Managing Director for EMEIA. Marcin has been the Vice-Chairman of the Polish PE and VC Association.

Angelov is Chairman of the Bulgarian Private Equity and Venture Capital Association and a Partner at PostScriptum Ventures. Previously, he was an Economic Advisor to the President of Bulgaria and the Deputy Minister of Economy.

EETT 2018 is organised by Tech Tour, with support from the international venture fund Almaz Capital, the Bulgarian Private Equity and Venture Capital Association (BVBA) and the social and economic development think tank Emerging Europe. See more about the organisers below.

All media representatives can attend the event free of charge. For registration via email, please contact hhristov@techtour.com or Irina@almazcapital.com up to 11 June 2018 for Warsaw and up to 12 June for Sofia.

Founded in 1998, Tech Tour is a community for entrepreneurs and investors with strong positions in the venture capital market. We promote innovative companies and their projects through our online community platform and in person at our 25 networking events each year. We have 20-years of experience across Europe and the Middle East. Tech Tour presents a unique cross-border platform for growing and emerging innovative tech companies on their way to investment and funding – from the idea to the success story. For more information please see: www.techtour.com

The fund's investors include Cisco, the European Bank for Reconstruction and Development (EBRD), and the International Finance Corporation (IFC), a member of the World Bank Group.  Founded in 2008, Almaz Capital has 8 exits and over 25 portfolio companies. For more information, please visit: www.almazcapital.com

About the Bulgarian Private Equity and Venture Capital Association (BVBA)

The Bulgarian Private Equity and Venture Capital Association is a focal point of private investors, venture capital funds and the entrepreneurial community in Bulgaria. BVCA works alongside its members to improve the business environment and to drive innovation and growth in the country and the CEE region. The Association is committed to popularising the role of private investment as a reliable and sustainable source of funding for growing and established companies. For more information, please visit: http://bvca.bg/en/

Emerging Europe is a London-based think tank committed to boosting the social and economic development of Central and Eastern Europe as well as raising awareness about the region. EE provides credible, impartial information and educational resources, leveraging advocacy where it is appropriate and signalling calls to action for engagement and collaboration. For more information, please visit: www.emerging-europe.com