The PedCheck™, a device that will enable doctors to easily detect and measure peripheral artery disease (PAD) in the feet of people.

Every 30 seconds, somebody around the world undergoes a lower limb amputation.

The rising incidence of diabetes and the increased number of elderly bring an increased burden of associated complications, including peripheral artery disease (PAD) and diabetic foot ulcers (DFUs). Nearly 50% of patients presenting with DFUs have peripheral artery disease, and 25% of people with diabetes develop a DFU over time. Large DFUs in patients with PAD often do not heal, and instead, become infected or develop gangrene. When a DFU appears, it may be too late for the healthcare provider to do anything other than amputate. Even if a DFU heals, it has a 40% chance of recurring within a year, and a 65% chance of recurring within three years.

Identifying and treating PAD is important in bringing down the number of lower limb amputations – yet many cases of PAD remain undiagnosed and therefore untreated, also as there is currently no affordable and reliable way to diagnose PAD in diabetic patients.

PAD is a preventable and treatable condition that causes unnecessary suffering and death. It is a progressive atherosclerotic disease, in which one or more peripheral arteries, typically in the lower limbs, are partially or completely obstructed. Lower-extremity PAD is associated with significantly reduced function and quality of life, increased risk of hospitalization and amputation, high mortality, and high cost of care.

Globally, around 200 million people suffer from PAD. In the US alone, PAD affects 8 to 10 million people, most of them over 65 years; by 2050 an estimated 19 million people in the US will have PAD. One-third of PAD patients die within 5 years of diagnosis. PAD patients are also at risk of amputation, especially if they also have diabetes.

Leading organisations such as the American Heart Association (AHA) are actively increasing awareness for the need to screen for PAD, among physicians, the general public and policymakers. As the AHA wrote in its PAD National Action Plan published in May 2022, "Despite its prevalence and adverse impacts on patients, PAD is often underappreciated and underdiagnosed…..screening remains unavailable to many patients at high risk… This is a critical gap: early detection of PAD is essential for optimizing its management to prevent lower extremity amputations and reduce heart attack, stroke and death."

Because it has been difficult to determine if people have PAD, many remain undiagnosed, even if they are in a risk group for PAD, like smokers and diabetics. Undiagnosed and thereby untreated PAD can have a significant negative impact on health and function.

VOTIS will change that by providing the PedCheck™, a simple-to-use and inexpensive device that will enable doctors to easily detect and measure peripheral artery disease (PAD) in the feet of people. The PedCheck™ uses its proprietary HOVR™ (short for Hemodynamic Occlusive Vascular Response) technology to calculate oxy-hemoglobin, deoxyhemoglobin, and total oxygen saturation. This information provides the treating physician with useful information about the location and severity of the disease.

By identifying which areas of the foot lack perfusion, the doctor can identify occluded arteries in the leg. PedCheck™, VOTIS‘s flagship device, will enable doctors to objectively and repeatably assess the condition of the patient's feet. It is a non-invasive and easy-to-use device that has been designed to measure PAD at specific locations deep within the patient’s feet. It does this by directing light into the foot from patches that are applied to the foot. Changes in the scattering and absorption of the light in response to the application of a pressure cuff at the patient's lower thigh enable the PedCheck™ to measure PAD deep within the foot, even before symptoms appear.

Early in May 2022, VOTIS enrolled the first patient in the feasibility study of the PedCheck™ at Hadassah Medical Center in Jerusalem, Israel. The pilot study, entitled "The Use of Hemodynamic Occlusive Vascular Response (HOVR™) technology to Screen for Peripheral Arterial Disease (PAD)", is intended to test the feasibility, usability, and safety of VOTIS's proprietary PedCheck™ device. 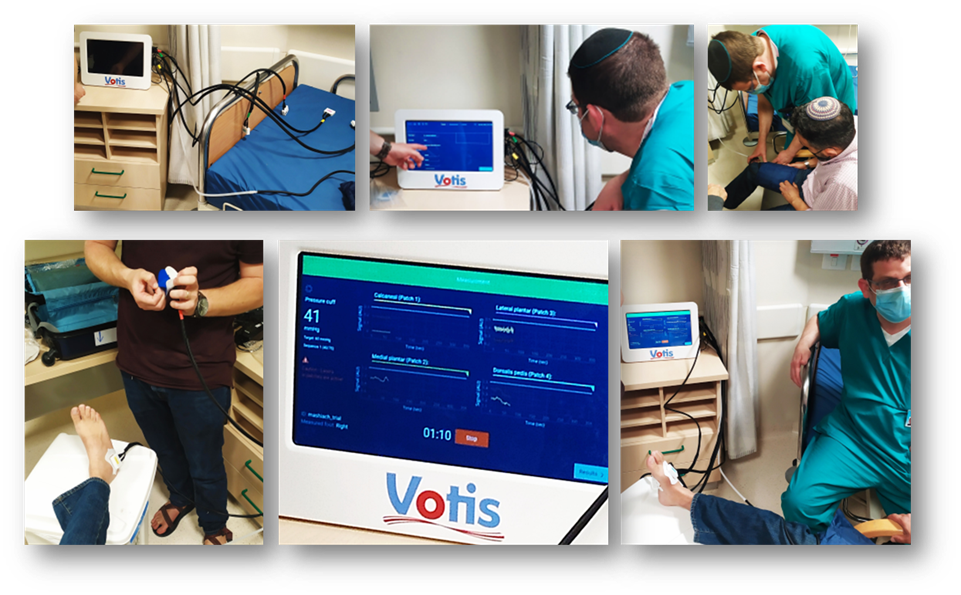 Unlike other methods used to test for PAD, HOVR™ technology enables the healthcare provider to look deeper and see better. VOTIS intends to develop the PedCheck™ as the new gold standard in identifying and measuring PAD, with a first focus on the US and selected European markets.

VOTIS is led by an experienced leadership team. Merrill Weber, co-founder and CEO, is a serial entrepreneur. The company's Product Director, Mashiach Hakimi, has a 20-year career that includes working at companies including Cisco Systems and MobilEye. The Chief Clinical Officer, Hamutal Shahar, PhD, has experience with both medical devices and pharmaceuticals, and the Marketing Director, Karin de Hiep, worked in marketing and business development for companies like Philips and Novartis (later Nestlé) Medical Nutrition. The company was founded when Mr. Weber licensed HOVR™ technology from Columbia University in New York, where it was invented, and where prototype devices using the technology were successfully tested on 150 human subjects.